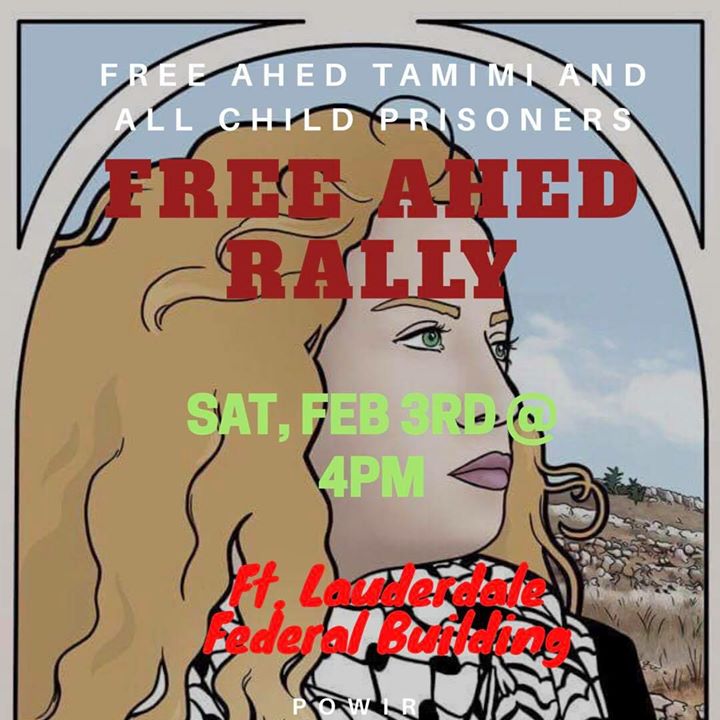 Join us for a rally followed by speeches, petition signing, and information about moving forward in the pro-Palestine, BDS movement of South Florida!

Ahed has been targeted by the Israeli state for her family’s long standing anti-colonial activism that opposes the Israeli occupation and the continued annexation of their village lands by Israeli settlements. On January 1, Ahed was indicted with 12 charges for activism, including assault of an IDF soldier and incitement based on social media posts. This punishment has also been collectively extended to her mother Nariman and her cousin Muhammad Tamimi who was shot in the face with rubber bullets at an Anti-Trump action.

Since the year 2000, over 8,000 Palestinian children have been detained in Israeli jails. These children are often not allowed legal counseling or even allowed contact with their parents. Israel, using its “emergency rules,” operates under 1,500 military laws that can be arbitrarily changed. This often denies Palestinians the right for legal representation or trial, leading to indefinite detainment. Mass arrest is commonly used as a tool of collective punishment which is illegal under international law. Israel is the only country to prosecute children in military courts.

We stand against this practice and the larger colonization of Palestinian lands that has been ongoing for decades. We support all those, young and old, who resist Israeli occupation. We denounce the charges against Ahed and the criminalization of young freedom fighters, while violent while IDF soldiers are given free range to abuse Palestinians with no consequences.