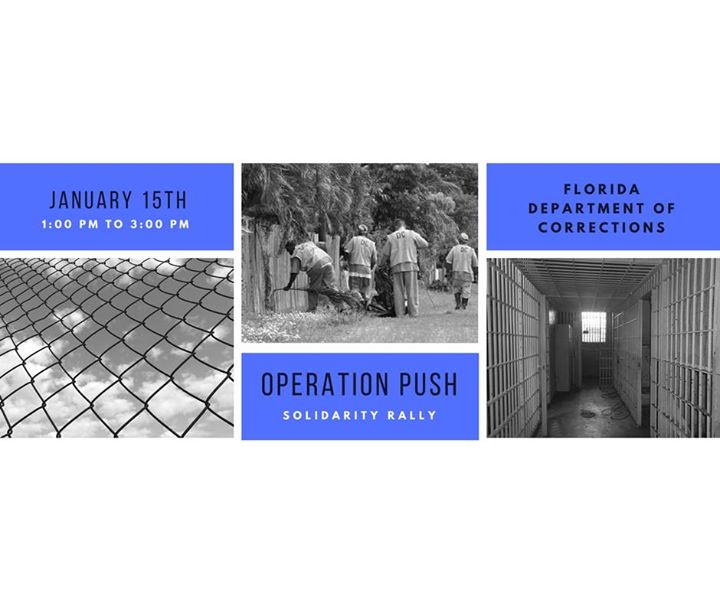 Celebrate MLK Day by protesting this country’s most prolific racist monuments – its prisons! Florida prisoners are going on strike beginning January 15th in their fight to end prison slavery and improve the deplorable conditions within FL prisons.

*NOTE we have changed the location, this is no longer at Everglades Correctional Institution.*

We will be rallying at the FDOC’s Miami Circuit Office which oversees all probation & parole offices in Dade county.

The following text is a call from the striking prisoners:

FL Prisoners Call for Operation PUSH to Improve the Lives of Incarcerated People and the Communities We Come From
Sending out an S.O.S. to all parties concerned!

We are calling on all organized groups as well as religious systems to come together on the same page. We will be taking a stand for:

1. Payment for our labor, rather than the current slave arrangement
2. Ending outrageous canteen prices
3. Reintroducing parole incentives to lifers and those with Buck Rogers dates

Along with these primary demands, we are also expressing our support for the following goals:

• Stop the overcrowding and acts of brutality committed by officers throughout FDOC which have resulted in the highest death rates in prison history.
• Expose the environmental conditions we face, including extreme temperatures, mold, contaminated water, and being placed next to toxic sites such as landfills, military bases and phosphate mines (including a proposed mine which would surround the Reception and Medical Center prison in Lake Butler).
• Honor the moratorium on state executions, as a court-ordered the state to do, without the legal loophole now being used to kill prisoners on death row.
• Restore voting rights as a basic human right to all, not a privilege, regardless of criminal convictions.

Operation PUSH
Every Institution must prepare to lay down for at least one month or longer: No prisoners will go to their job assignments.

Our goal is to make the Governor realize that it will cost the state of Florida millions of dollars daily to contract outside companies to come and cook, clean, and handle the maintenance. This will cause a total BREAK DOWN.

In order to become very effective we must use everything we have to show that we mean business. This is our chance to establish UNITY and SOLIDARITY. This is the strategy of Operation PUSH! A voice locked up is not a voice unheard!

Slave labor
We are encouraging prisoners throughout the DOC to band together in an effort to demand payment for work performances.

One of the main reasons why we’re demanding payment as opposed to gain time is because the DOC is bent on taking something we’ve earned away and using it against us to restructure new release dates.

Another reason is that $50 and a bus ticket to parts unknown is not working for us, especially if we have conditions that require us to pay out of pocket cost.

The system knows that the odds are heavily stacked against us when we reenter into mainstream society, so they make it look like they’re helping us by giving us $50, but the reality is it’s not enough to do anything with!

With even a modest amount of payment we will be able to save up something to survive outside with; for those with lengthy sentences, they would be able to support themselves inside.

At any event, once we win establishment of payment, this would be the one thing the system won’t be able to take away from us.
While this will be the strongest “Push,” our next concern will be on price-gouging us with items we buy out of canteen.

Price Gouging
We can no longer allow the state to take advantage of our families’ hard earned money by over-charging us, they’re taking food out our mouths! All prisoners and their family members are getting pimped with these outrageous canteen prices. We want regular market value.

Take for example: one case of soup on the street cost $4.00. It costs us $17.00 on the inside. This is highway robbery without a gun. It’s not just us that they’re taking from. It’s our families who struggle to make ends meet and send us money—they are the real victims that the state of Florida is taking advantage of. We got to put a stop to this!

Parole
The federal government has given every state in the country a choice as to how they wish to use incentives to reward their prisoners. Florida decided to offer gain time as an incentive, however, those who have life sentences and Buck Rogers dates don’t have any incentives.

We are now demanding that the State of Florida bring back parole and come up with a payment for prisoners work performances, as the law required.

Let us demonstrate why these two issues are so important. Take for example someone who has done a ten year bid. In the process he loses all family support and money stops, the letters stop. He finds himself supporting himself the best way he can. In short, the system robbed him of ten years of labor.

He has nothing to show for it so now even if he does his ten year bid with no probation or parole, he’s still a convicted felon, and finding a job is very difficult.

These are the things we’re protesting, and we are currently trying to mentally prepare Florida inmates throughout the DOC for January 15.

WE HAVE TO STRIKE BACK AND STAND FOR WHAT IS RIGHT!

What do you do when there’s no body giving you jack shit and you’re hungry? Add to this you wearing hand-me-downs, looking like you can’t be trusted? This is enough to drive you off the edge and try your hand at stealing, robbing, or selling drugs to make a dollar.

This is not a joke! In fact it’s our reality and for those who do have strong family support, we salute you, but please understand you are the few that are blessed with the foot hold that you have. This is not the case for the over-all majority, and this is the cause of high recidivism rates.

It’s time we reverse the psychology and STAND together. The way to strike back is not with violence as this is what they want! If we show them violence they will have a legitimate excuse to use brute force against us and explain to the public that they had to use brute force in order to contain the situation. However, their weakness is their wallet.

By sitting down and doing nothing, each institution will have the responsibility of feeding, cleaning, and all the maintenance. DO THE MATH.

The more institutions that have to employ outside contractors, the sooner we will see results.