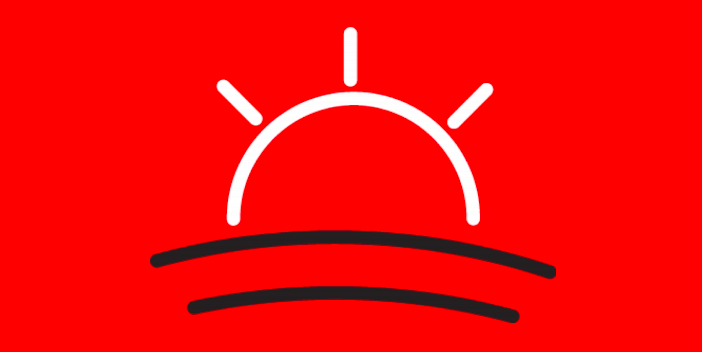 (A printable version of this report can be found here)

Introduction
As Hurricane Irma swelled into one of largest storms on record, it meandered across the Atlantic reigning destruction throughout the Antilles before taking aim at Florida. Recognizing the immensity of the storm and the erratic nature of its path, members of 10 different local chapters and organizing committees (OCs) of the Democratic Socialists of America (DSA) throughout the state of Florida began a conversation about how to both prepare for and respond to the devastation that all but certainly awaited our state.

Planning
Acutely aware that under capitalism, the preparation and response by municipalities, the state, and the federal government was not likely to meet the immense human need generated by Irma’s wrath, we began to analyze how we as socialists could mitigate the effects of the storm in the immediate aftermath and enhance the long-term recovery effort. We realized quickly (following the model of our comrades in Houston DSA) that we had both the ability and the need to crowdsource funding for the relief effort. With guidance from comrades across the country, members of DSA staff, and a huge help from Red River Valley (RRV) DSA who agreed to temporarily host the generated funds, we launched a YouCaring fundraiser and resolved to adopt the following initial planks for the disbursement of funding:

During the Storm
Many of us living in the most vulnerable areas had no recourse but to evacuate ahead of Irma’s
landfall, joining what would become one of the largest evacuations in U.S. history. Others rode
out the storm in municipal shelters, or hunkered in place with our friends and families. Despite
massive power outages, widespread disruptions of phone services, and a near complete shutdown of mass transit, we continued planning for the relief effort as Irma surged ocean water and toppled trees throughout our communities. Members of DSA throughout Florida were hosting nightly conference calls to coordinate fundraising, social media, and outreach efforts and to update each other about the situation on the ground in our various municipalities. We quickly began to reach out to and establish relationships with various like-minded organizations across Florida and subsequently the Caribbean to maximize the effectiveness of our relief efforts.

Aftermath
In the wake of Hurricane Irma, members of DSA worked tirelessly in coalition with various organizations around the state to provide on-the-ground relief. Mere days after Irma made landfall in Florida, another storm of colossal magnitude (Maria) devastated the island of Puerto Rico. As fundraising and relied efforts continued, we began to identify organizations in Florida and Puerto Rico to fund and partner with
that would best meet the needs of working class people affected by these storms. What follows are descriptions of organizations that received funding and how that money was allocated by each local chapter and organizing committee of DSA.

Recipients of DSA Funding
Mutual Aid Disaster Relief (MADR) is a decentralized network based out of Tampa, Florida that provides disaster relief based on the principles of power-from-below solidarity, mutual aid, and autonomous direct action rather than out of charity. In the past 2 years MADR volunteers have responded to floods in Baton Rouge & West Virginia, earthquakes in Mexico, and Hurricanes Matthew, Irma, and Maria.

In response to Hurricane Irma, MADR was heavily involved in the umbrella organization, Irma Decentralized Response, including operating a volunteer relief hotline, and creating a staging area called “The Hub.”. The Hub has been used as a home base for providing support to impacted communities throughout the entire state including working class neighborhoods, inhabited coastal areas, and farmworker communities experiencing flooding, power outages, damage to homes, and lack of food and water. Support has been provided through free medical care and the delivery of food, water, cleaning, and hygiene supplies. After the storm aid trucks were dispatched on a daily basis to communities such as Immokalee, Apopka, the Florida Keys, Tampa, Daytona, and others.

Since early October 2017 MADR has also been deeply involved on the ground in Puerto Rico, continually providing relief to those affected by Hurricane Maria, sending volunteers, food and medical aid, despite being antagonized by law enforcement who raided a base of operations they were working out of.
The aid provided by the DSA’s Hurricane Irma Relief Fund assisted MADR in procuring more food and water, generators, mold remediation gear, rental trucks, fuel costs, medication, muck and gut tools, as well as funds to cover emergency housing needs.

Taller Salud is an affiliate of the Center for Popular Democracy based in Loiza, Puerto Rico. It describes itself as a feminist, community-based non-profit organization committed to social justice, economic development and peace in northeastern Puerto Rico, focusing specifically on providing healthcare to low-
income women. They actively participated in on-the-ground hurricane relief efforts in Puerto Rico.

Irma Community Recovery Fund (ICRF) consists of a coalition of non-profit organizations affiliated with the State Alignment Table. They set up the community recovery fund to aid the most vulnerable communities affected by Irma, including the 3 million Floridians living in poverty and the estimated 850,000 undocumented people across the state. The fund endeavors to address basic needs such as healthcare, housing, transportation, and legal representation.

Maria Community Recovery Fund (MCRF) is housed within the Center for Popular
Democracy. According to the center, funds will be used to support immediate relief, recovery and equitable rebuilding in Puerto Rico for low-income communities of color hit hardest by the storm. The fund will support organizations working on the frontlines with these communities. Grants from the Maria Fund will be decided by a committee of Puerto Ricans, 50% from the island and 50% in the diaspora. Organizations receiving support from the fund include Taller Salud, the G8 of Cano Martin Pena, and Centro para Desarrollo Politico, Educativo, y Cultural in Caguas. 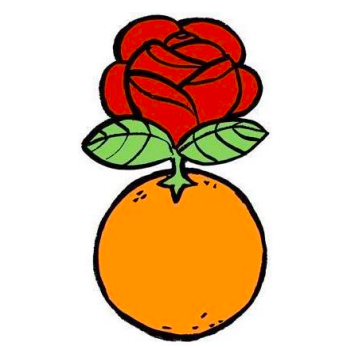 Distribution of Donations
Funds received by October 17th 2017:
Total (after crowdfunding fee) = $9622.44
Plus, a $150 donation sent directly to RRV DSA
= $9772.44
4 out of 10 of the Florida DSA groups in areas of
less heavily affected by the storm elected to
return their portion back to the main fund.
This resulting in the funds being divided as
follows: 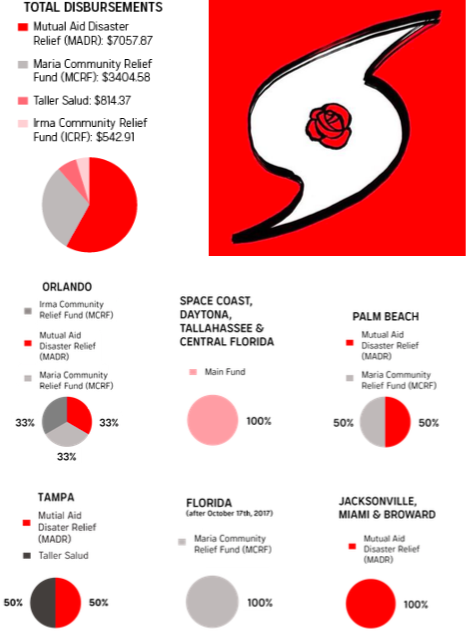